Google’s search ranking algorithms saw quite a bit of change throughout 2018. There were changes in how images are searched for, how mobile websites are indexed, and much, much more. 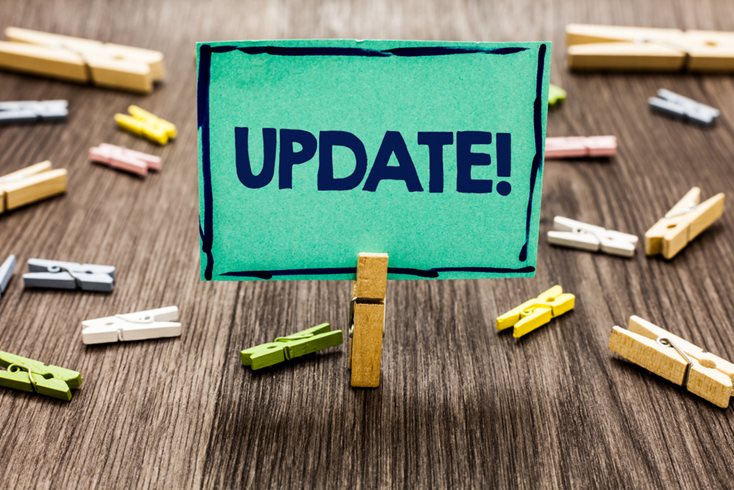 Year after year, we see all kinds of updates to Google’s all-powerful search ranking algorithms. Some are trivial, while others shock SEO experts to the core. As Google is famously quiet about what exactly goes into their algorithms, digital marketers must create theories about how to improve rankings.

In 2018, we saw Google’s search ranking algorithm continue its never-ending quest to think more like the everyday user. We’ve put together an infographic discussing Google’s biggest algorithm updates of the year.

The Confirmed Image Search Update generated mixed reviews. On February 15th, Google made an official announcement that they changed the functionality of image search by removing the “Search by Image” and “View Image” button. Webmasters were delighted by this change because users are now required to visit their site to see an image. According to Google, the purpose is “so users can see images in the context of the webpages they are on.” For the most part, users found this change to be a nuisance. 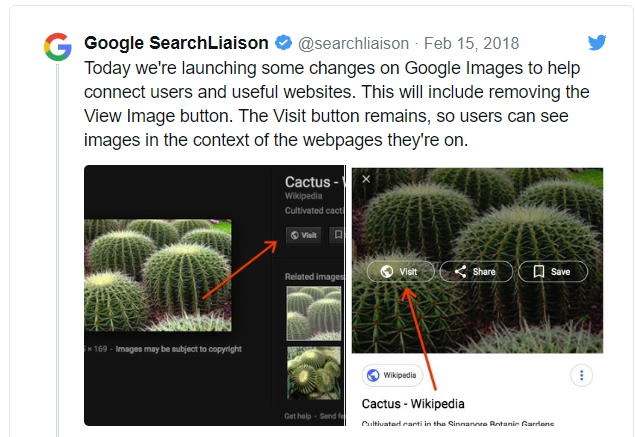 While the reasoning behind this change is unclear, many believe it was due to a legal dispute with Getty Images.

Google has always placed a heavy emphasis on producing quality content that improves the searcher’s experience. The “Brackets” Core update prompted a great deal of drops and boosts in websites’ rankings across the board.

Although we have seen plenty of updates related to content quality, many experts believe this one has more to do with relevancy in that content must be more oriented to user intent. The effects of this update were seen as early as March 5th. However, most websites felt the true impact on March 8th and 9th. 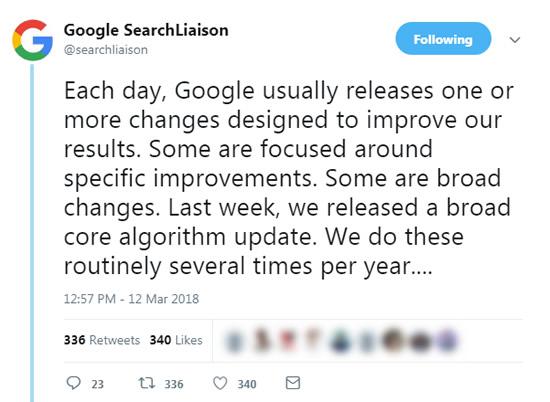 Adhering to this update is not overly complex. Content creators need to keep relevant searches in mind and make an effort to offer one-of-a-kind messaging that cannot be found anywhere else.

The Zero-Result SERP update made finding quick answers much easier. The goal of this update is to yield concise results to queries with definitive answers. Answers are presented on Knowledge Cards in the “Zero Result” related to questions around weather, time, calculations, unit conversions, etc. 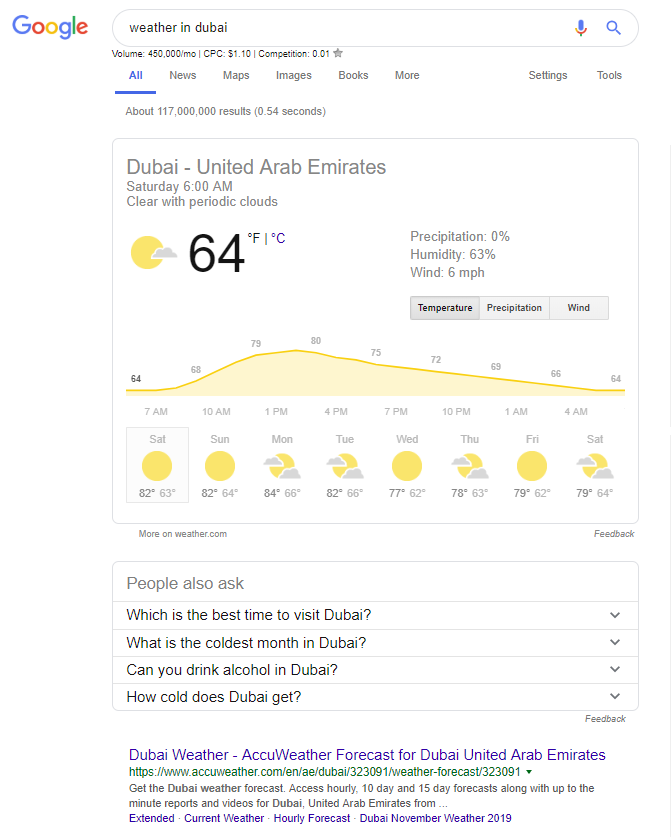 The Mobile-First Index Roll-Out was an anticipated update that many saw coming. For several years now, the percentage of mobile usage has outnumbered desktop usage – a gap that is getting increasingly bigger.

Essentially, this algorithm change signifies that Google will now index the mobile versions of websites before the desktop versions. Following March 26th, 2018, webmasters officially need to start prioritizing the mobile version of their site and make sure it is highly intuitive on smartphones and tablets.

Now, this update IS NOT in relation to how content is ranked on the web; it’s about how it is collected by the Google crawlers. Here is what they said on the matter in the Webmaster Blog:

The Snippet Length Drop was one of the more interesting updates of 2018. Mainly because it happened only five months after Google increased snippet lengths. In terms of snippet length on desktop, it went from around 300 characters to 160. Mobile snippet length is now down to around 130 characters. While nothing is certain, this update was likely done in response to the increasing trends related to mobile-first.

Now, this change certainly makes the search results look a little different, however, Google has advised webmasters not to spent too much time and effort on these snippets. Many snippets are chosen by their dynamic nature and are not always taken directly from Meta Descriptions.

For several years now, video has been gaining serious ground in the pool of online content. Mark Zuckerberg has famously gone on record saying he believes most content on the internet will be video in the near future.

Over the summer, Google replaced video thumbnails on desktop searches with carousel boxes. 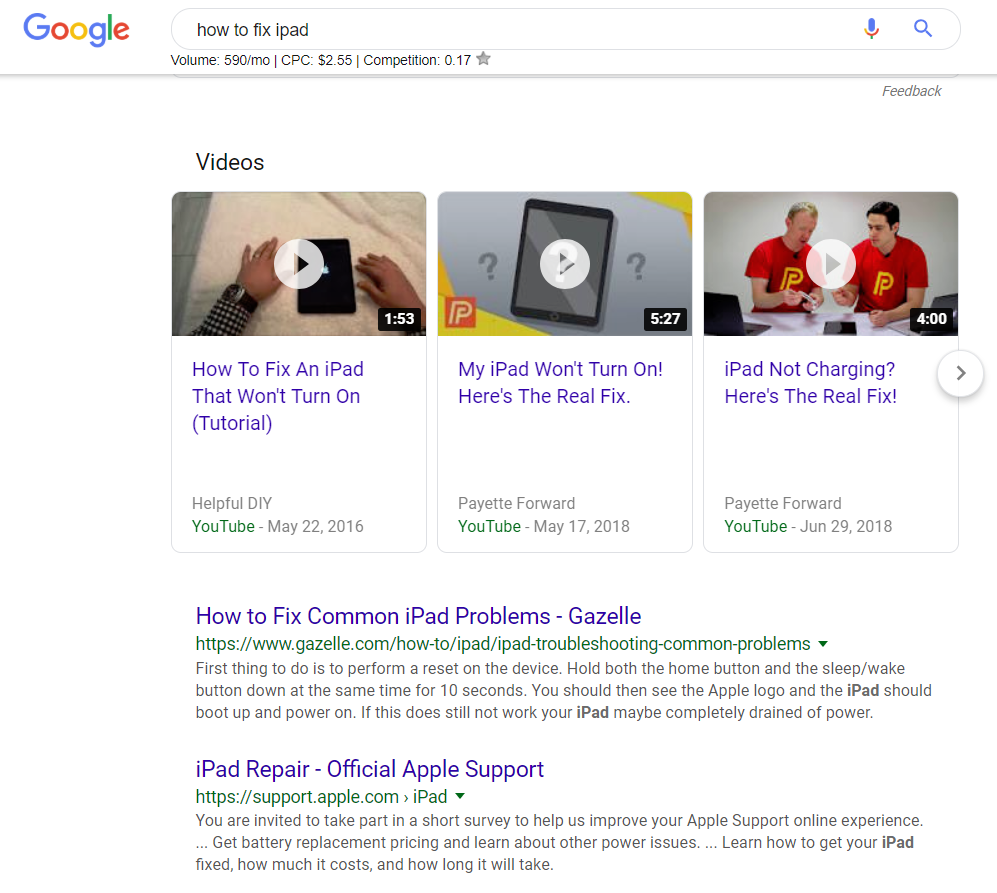 The purpose of this update is to allow searchers to find video answers to the queries without having to open a video sharing site externally. Video carousels are normally prompted in the SERPs with searches involving phrases like top 10 (or any number), how to, best ___, etc.

2018 was a big year for mobile in the eyes of Google. The Mobile Speed Update was another anticipated algorithm change in which the loading speed of a mobile website now influences its ranking on mobile searches.

When looking at the big picture, the ripple effect of this update wasn’t huge. The sites that saw a big impact were the absolute slowest mobile websites based on a small handful of queries. This algorithm change can be thought of as Google raising the bar for the standards of mobile site speed.

The Medic Core Update on August 1st was one that took the online marketing world by storm. The biggest impacts were felt by organizations in Your Money Your Lifeindustries (finance, healthcare, wellness, law, etc.). In a nutshell, Google carried out this algorithm change to make sure search queries were paired with the most credible content on the web.

For instance, if a searcher wants to learn more about a medicine or holistic approach, reading content written by a person or organization with little expertise could be dangerous. Following the update, SEO specialists across the marketing world were examining the changes under a microscope. One of the big takeaways was that YMYL organizations need to start prioritizing E-A-T Score, which stands for Expertise, Authority, and Trustworthiness. E2M recently interviewed Dr. Pete Meyers from Moz about this update in a podcast episode titled: SEO 2019: Content, Data, and Algorithms.

The common truth of SEO is you can never get too comfortable with your playbook, for it can become useless at any time. Google’s algorithms definitely saw a fair share of changes throughout 2018. As we advance further into 2019, there will almost certainly be more to come!